MENASA region (Middle east, North Africa and South Asia) is linked through the British rule in the 20th century. Studying this region, there is a strong link of trade and exchange that resulted in sharing a political and geographical history.

The 20th century saw British Empire thrive on this trade. Raw material like cotton, jute, tobacco, dyes, spices was taken away from the colonies. English people bought Indian cotton in the field, picked by Indian labor at a nominal wage. This cotton would be shipped on British ships to London. The opening of the Suez Canal shortened this trip drastically. Great Britain took control over Egypt in this process. Military garrisons were established in ports of the British Empire as strategic sights along the Great Maritime Route. Cotton would be turned into cloth in Britain and the finished product would be sent back to India at European shipping rates, once again on British ships. And then cloth finally sold back to the kings and landlords of India who had the money to buy this expensive cloth. Through the project ‘The Seven Seas’ this process is investigated and how even after a century we are still a part of the same larger network of forces at work. Within each quilt of the SevenSeas, a tale of rebellion associated with each particular port of trade is woven in.

MENASA accounts for 24 percent of today’s global hydrocarbon production and so economically and politically this is a strategic region. 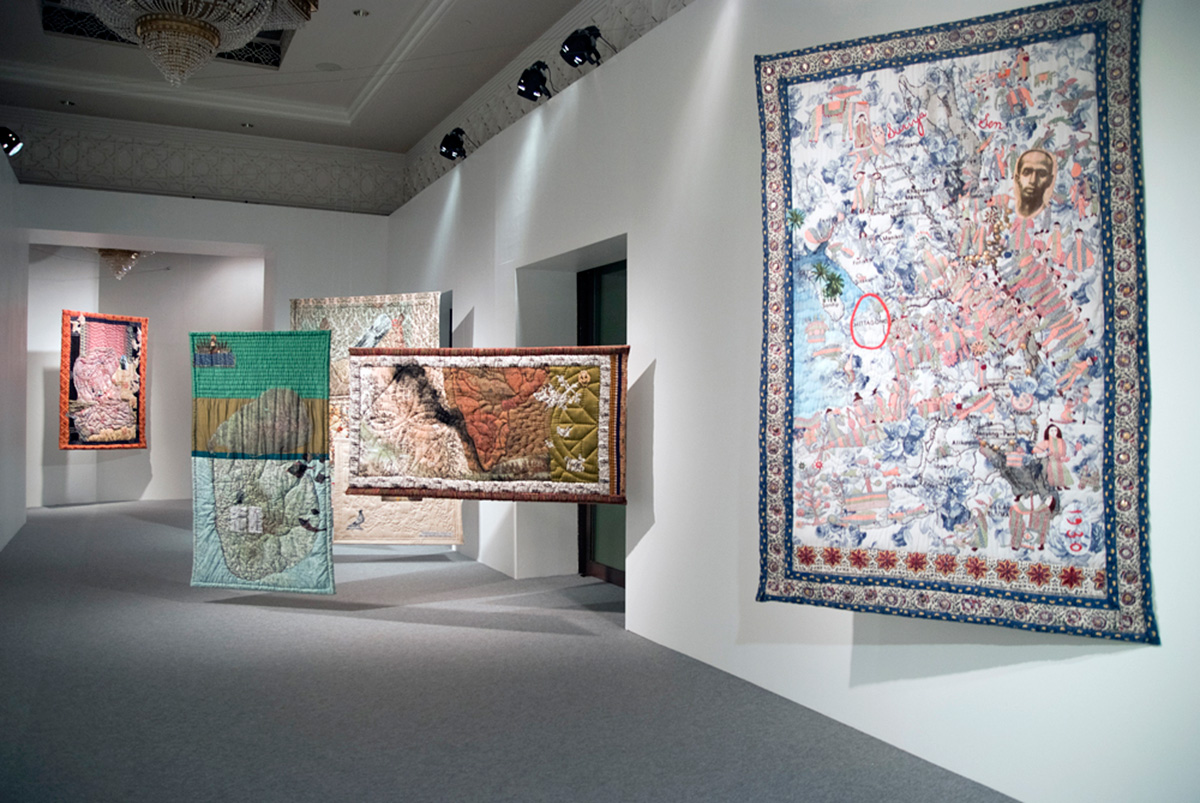 Installation View of the Seven Seas

Figures from ‘Nakshi Kantha’ quilt were cut and appliqued on to the local cotton material, rearranging them as if to tell a tale. The tale is of Suriya Sen who was a prominent Bengali freedom fighter, an Indian independence activist and the chief architect of an Anti-British freedom movement active centred in Chittagong, Bengal.He was born on 22 March 1894 in Chittagong. He led a nationwide non‐cooperation movement as a revolutionary. He was hanged on 12 January 1934 by the British rulers following his arrest in February 1933. 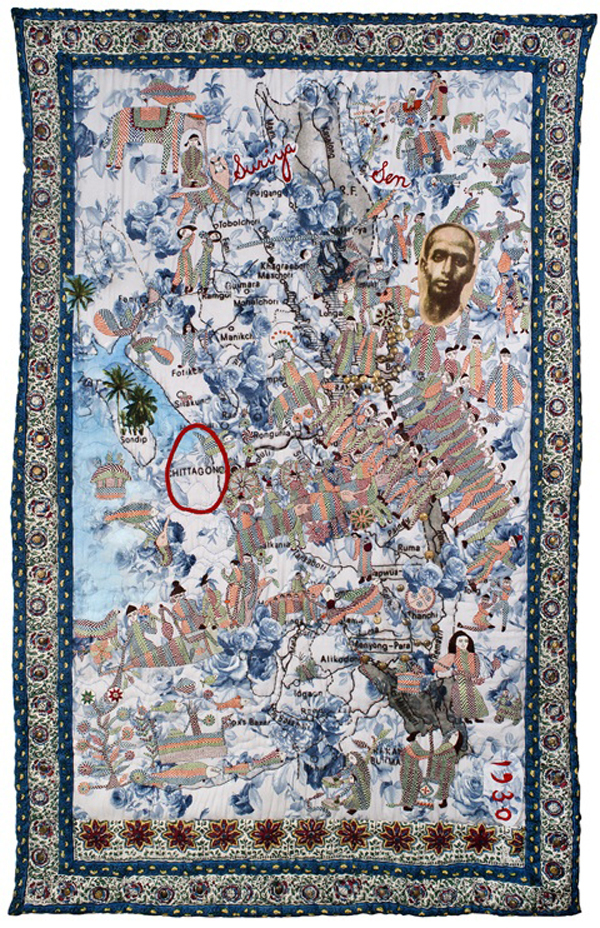 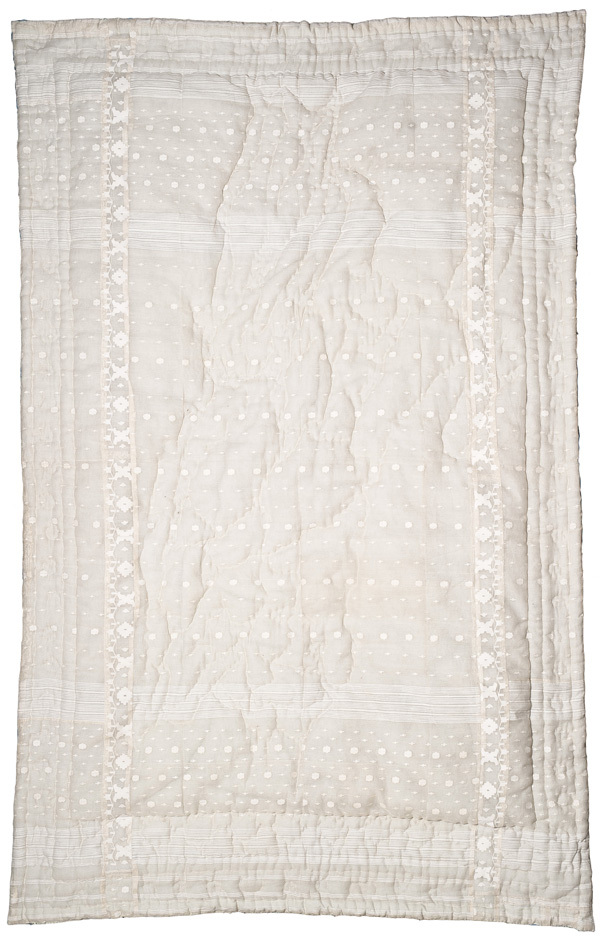 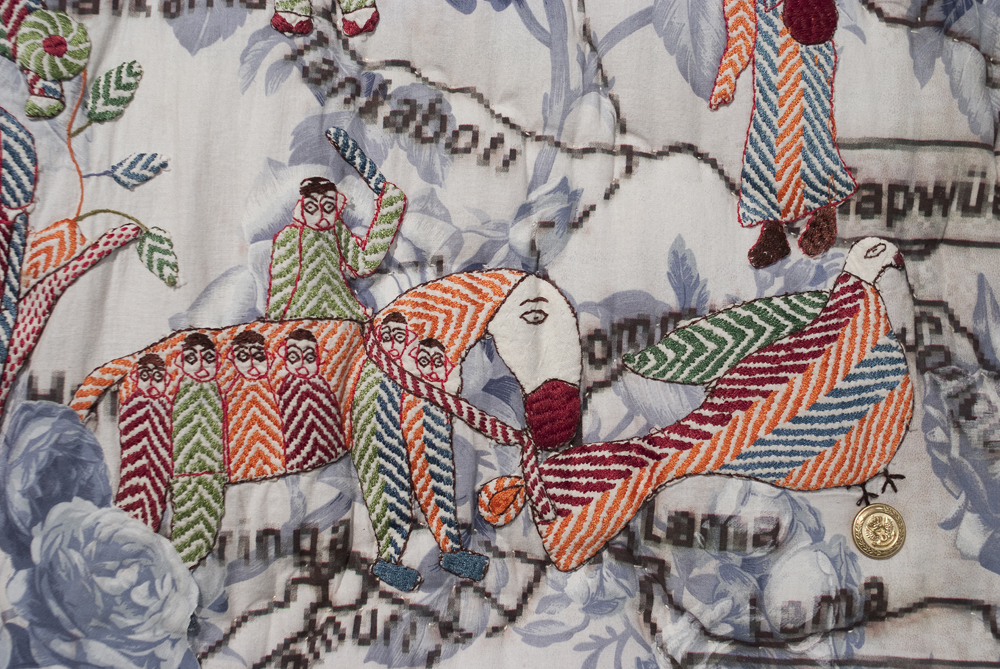 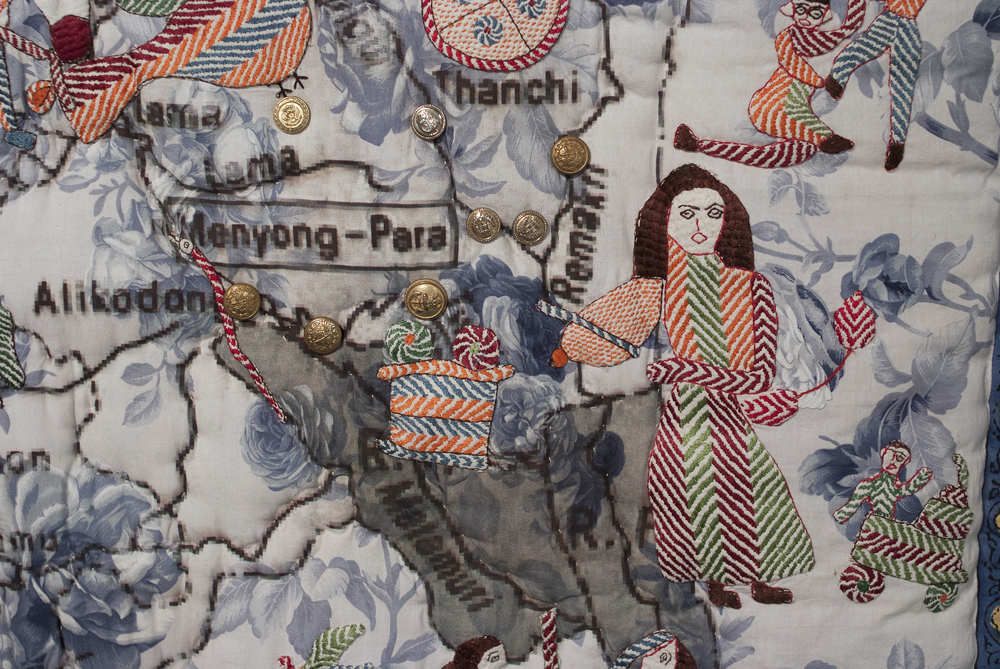 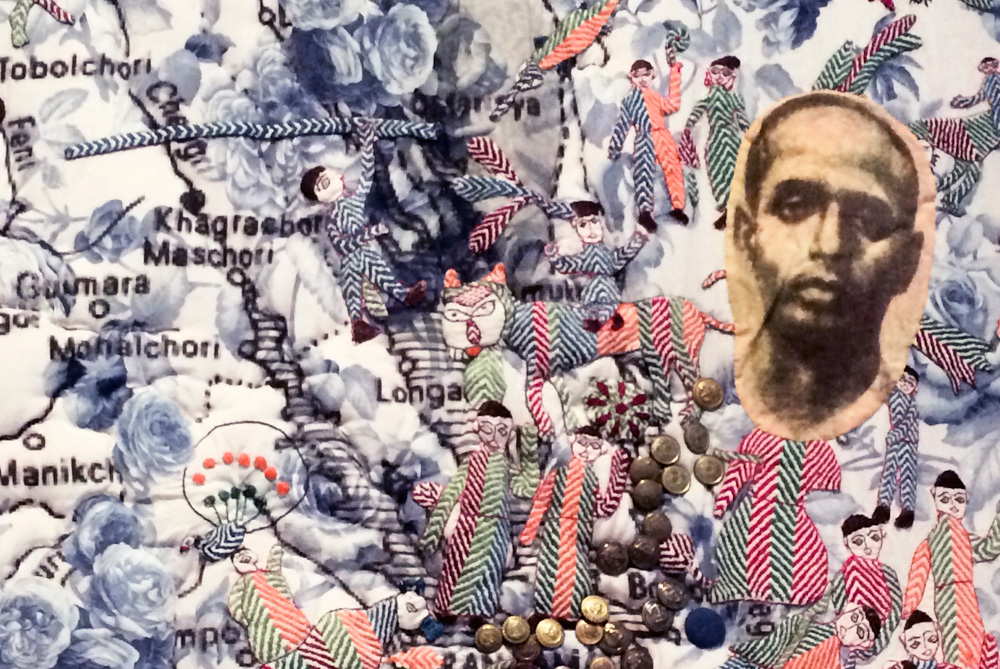 Here the rebellion related is the Royal Navy Revolt or The Royal Indian Navy mutiny (also called the Bombay Mutiny) that encompasses a total strike and subsequent revolt by Indian sailors of the Royal Indian Navy on board ship and shore establishments at Bombay harbour on 18th Feb 1946. From the initial flashpoint in Bombay, the mutiny spread and found support throughout British India, from Karachi to Calcutta and ultimately came to involve 78 ships, 20 shore establishments, and 20,000 sailors. 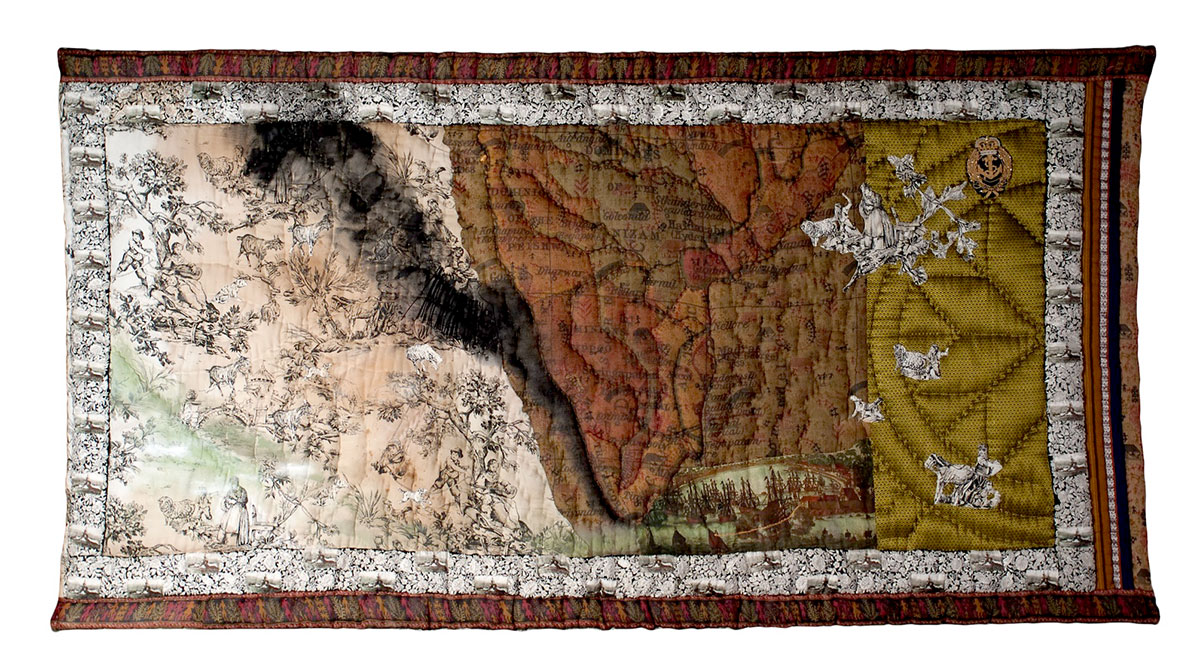 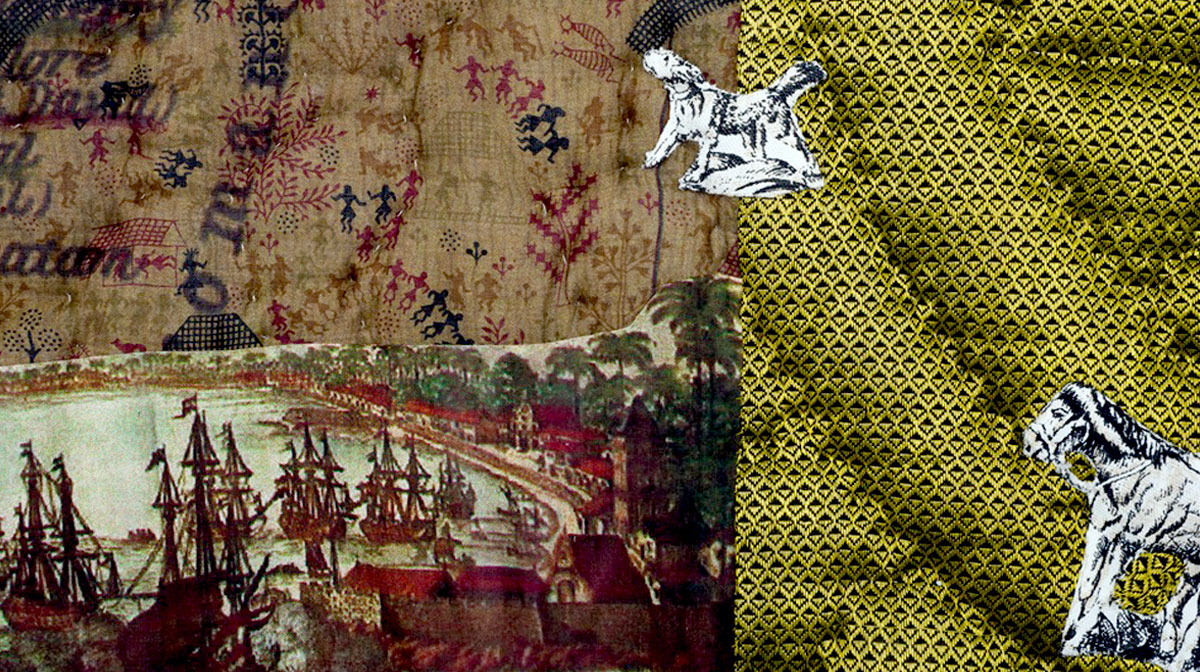 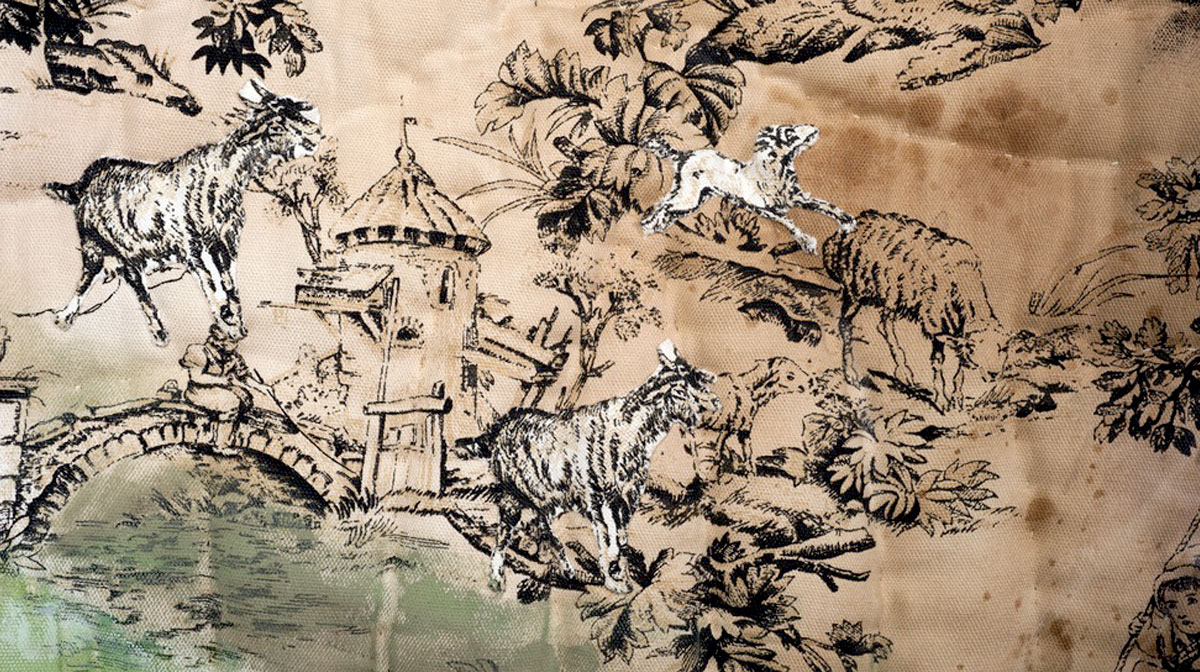 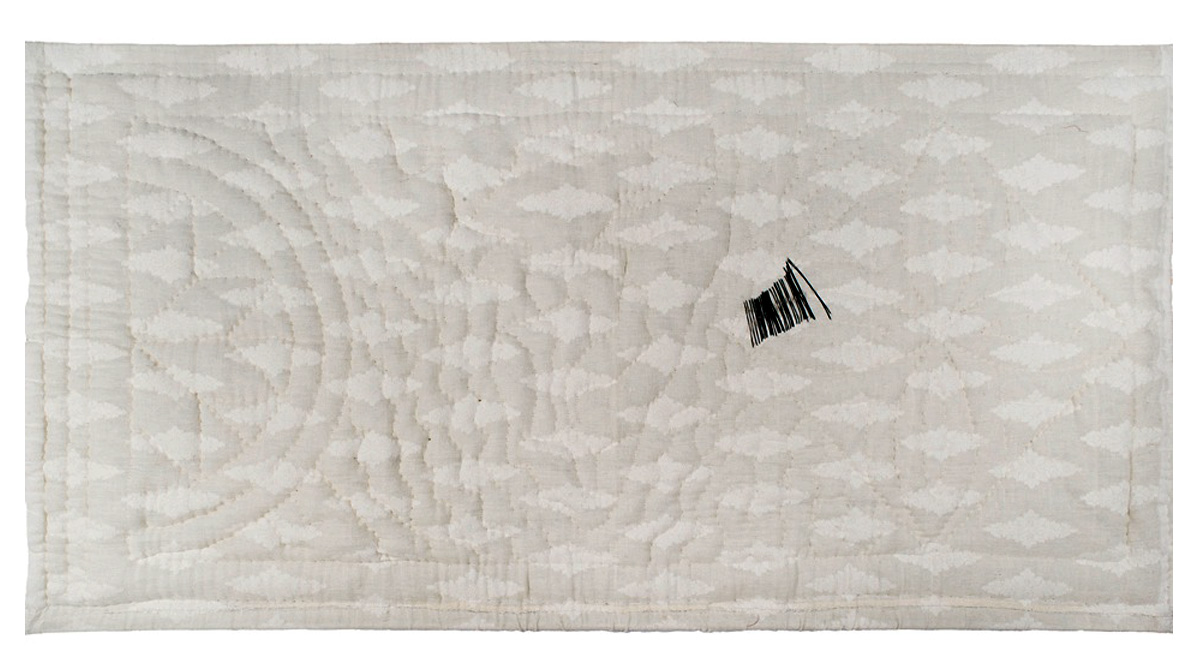 192cm x 120cm | Printed cotton, hand‐woven cotton, with digital printing
on cotton from Lahore, batik, ‘beralu lace’ at the back, American cotton wool for the filling.

Kandy is the centre of this quilt with a print of Kandy convention appliqued. Kandy has been the centre of rebellion with effects reaching Colombo, an important port. Although the British captured Colombo in 1796, it remained a British military outpost until the Kandyan Kingdom was ceded to them in 1815 and they made Colombo the capital of their newly created Crown Colony of Ceylon. The Kandian Wars refer generally to the period of warfare between the British colonial forces and the Kingdom of Kandy, on the island of what is now present day Sri Lanka, between 1796 and 1818. 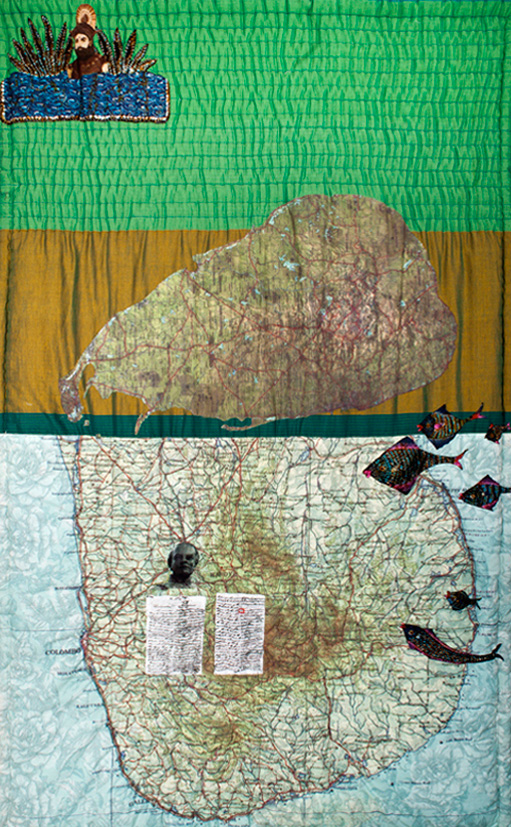 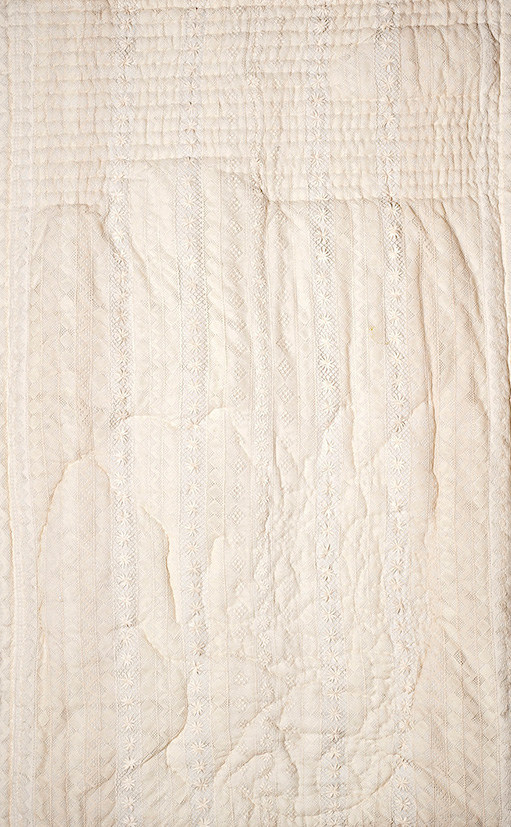 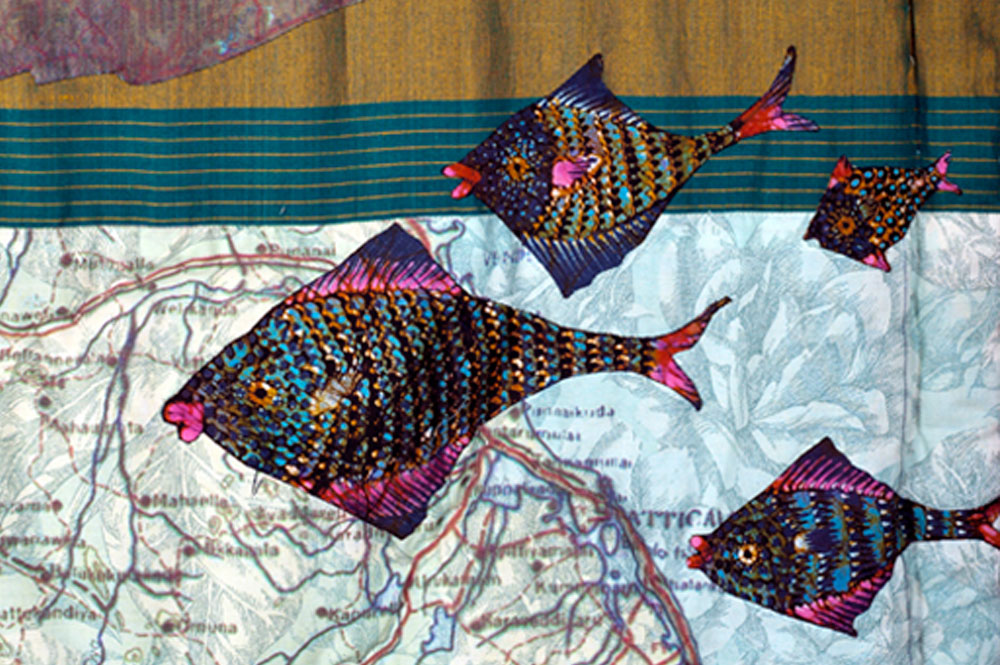 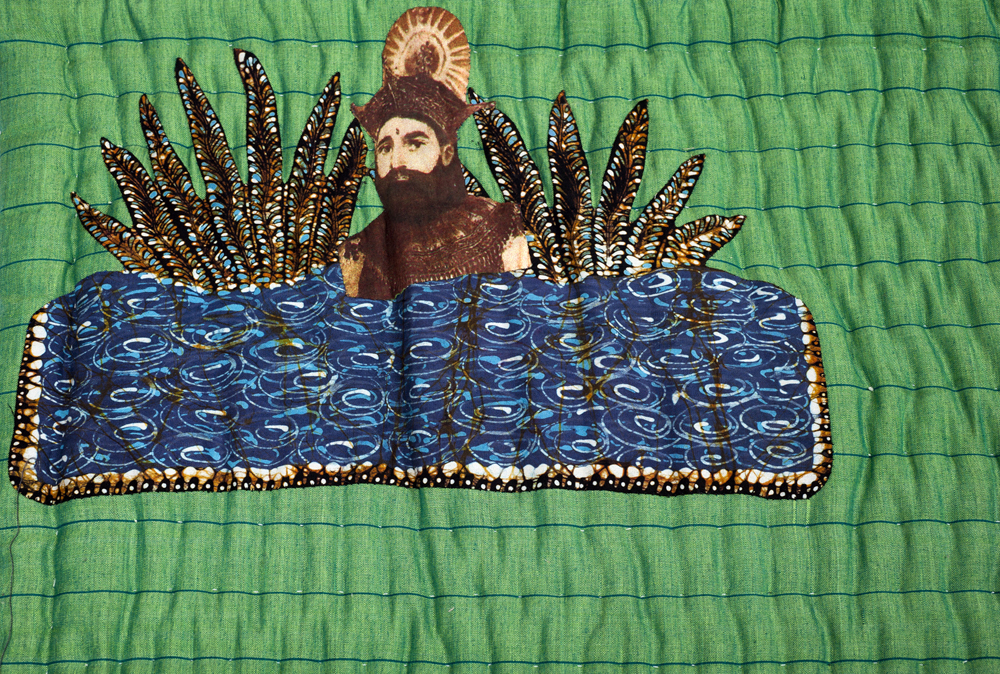 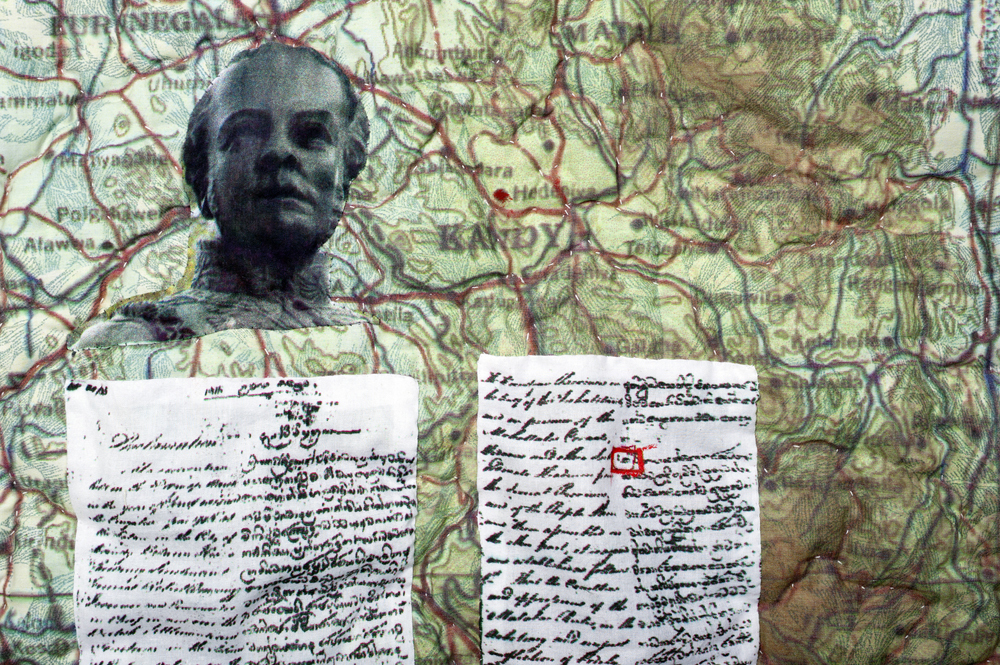 Turkish embroidery (which is actually outsourced from Turkmenistan today) is rearranged to accentuate the Greco-Turk War(1919-22) in which Izmir/Smyrna played a vital role. Incidentally, the Port of Izmir is one of the oldest cities in the Mediterranean region, having been inhabited over the past five thousand years. After World War I, with the defeat of the Ottoman Empire, the Allies intended to divide Anatolia among themselves. In 1919, Greek troops occupied the Port of Izmir and headed for central Anatolia, a disastrous move for the Greeks of Turkey. The Port of Izmir was retaken by Turkish forces led by Kemal Ataturk in 1922, ending the Greco-Turkish War. 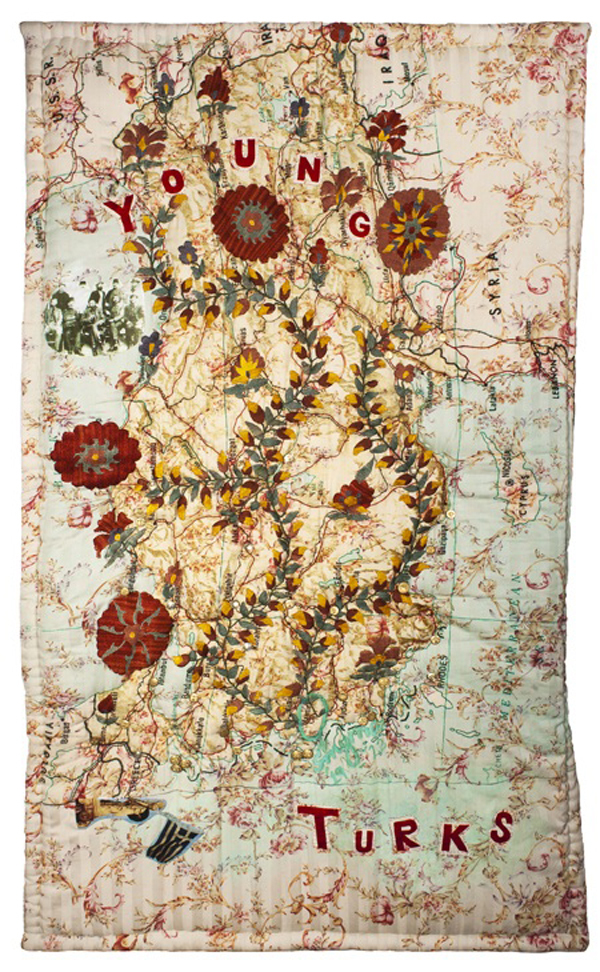 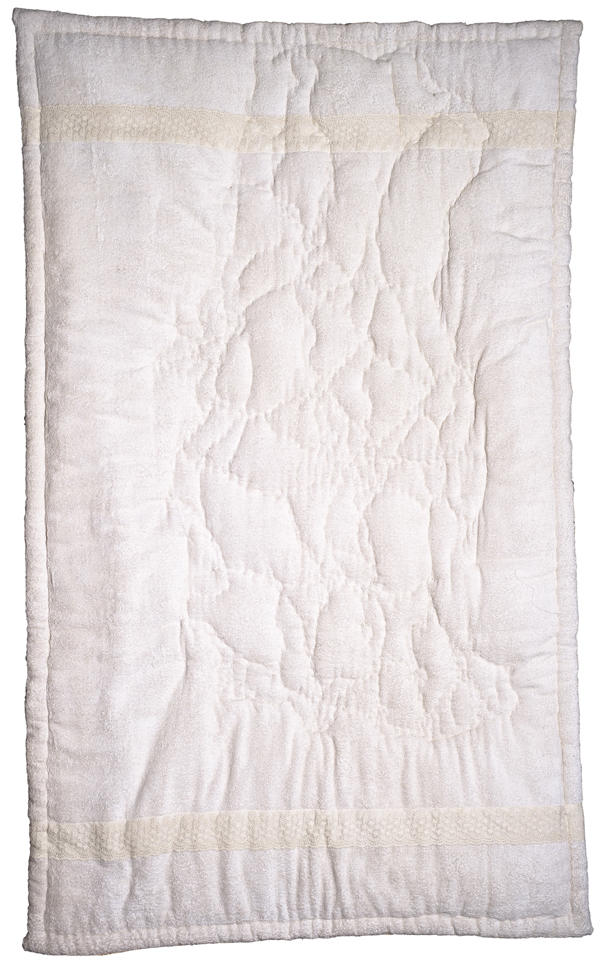 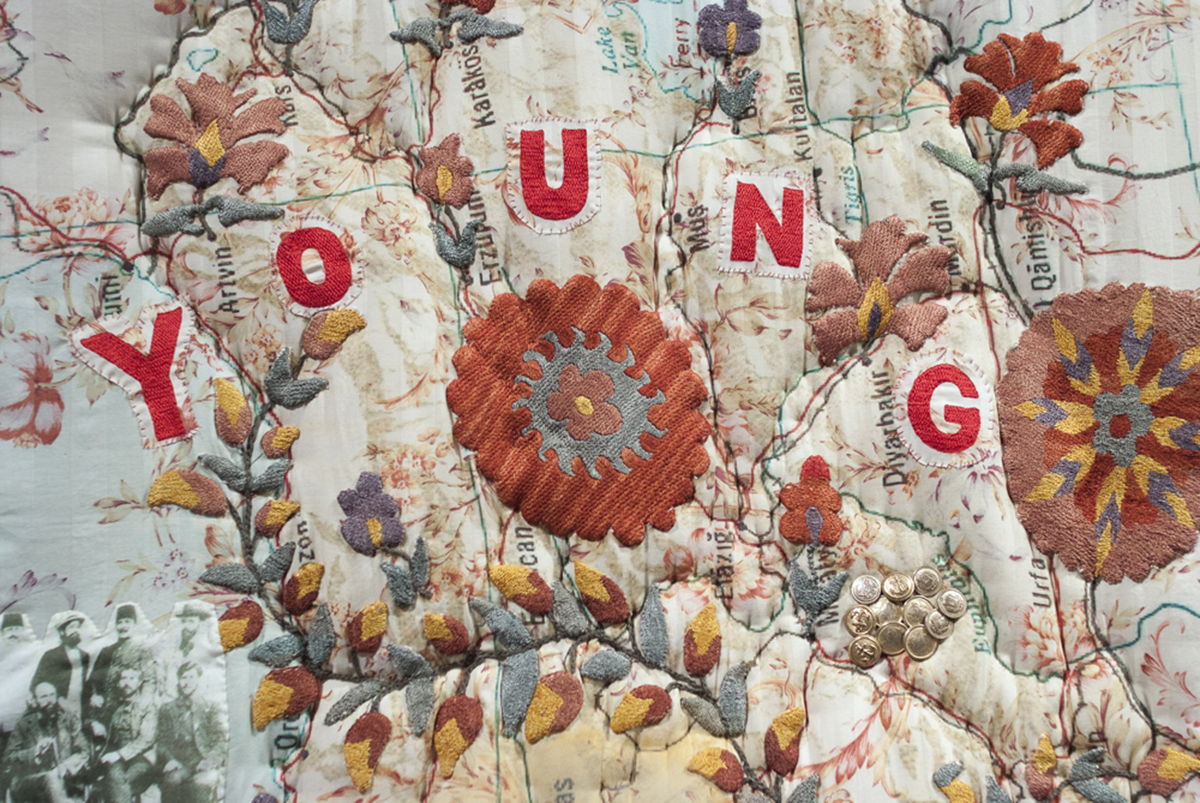 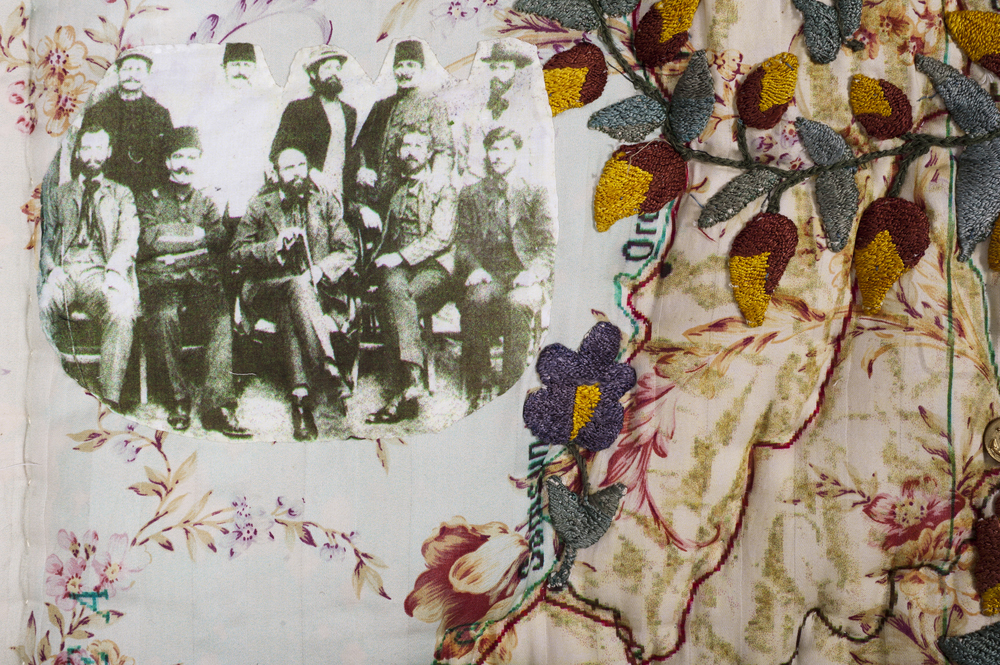 In Sind the Talpur Amirs signed a commercial treaty with the British in the 1830’s. The Baluchi soldiers of the Amirs, however, realised the implications of the British action for the future of Sind and resisted with frequent attacks on British supply lines. In 1943 they destroyed the British residency in Hyderabad. British forces under Napier defeated the Baluchi soldiers at Miani and brought Sind into
British Empire. 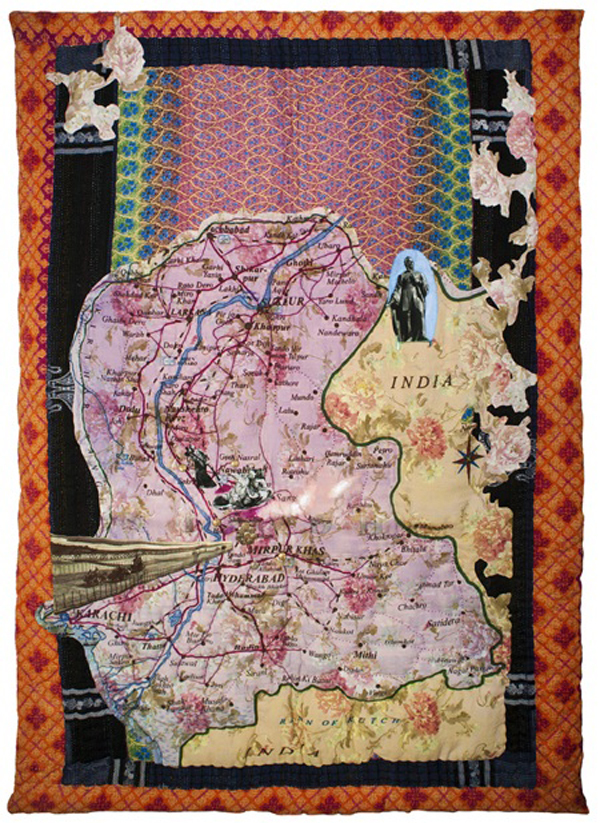 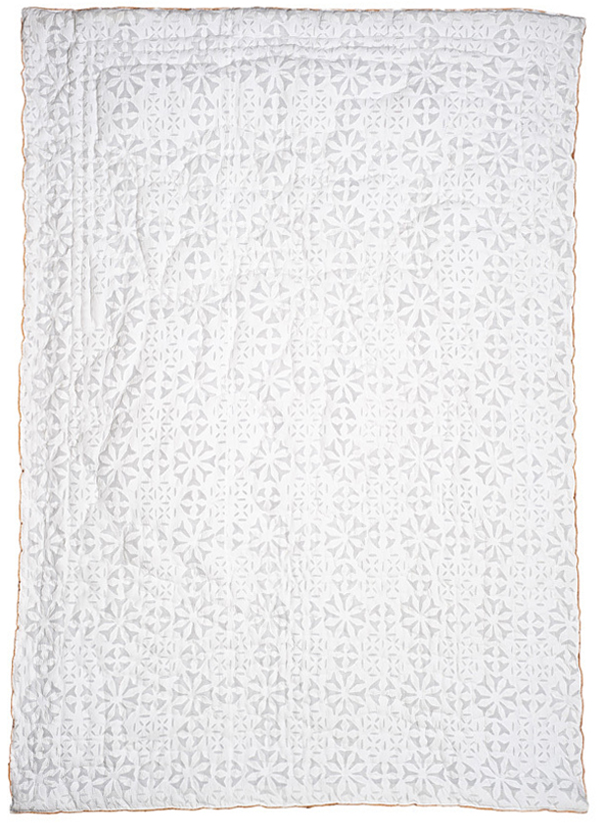 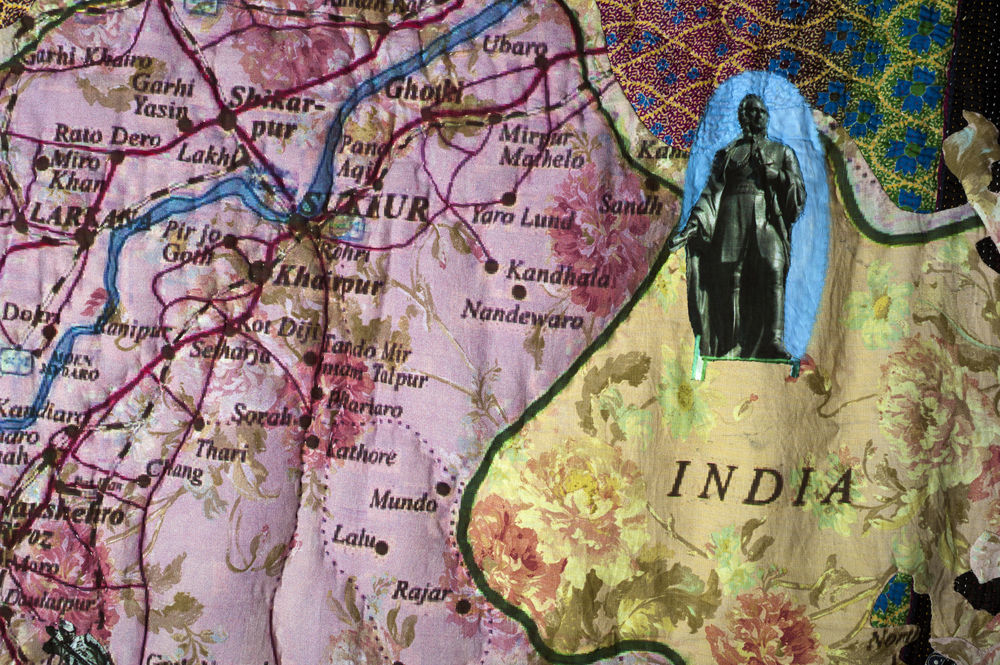 Qawasims was an influential Arab Nation at the Gulf coast. Ras Al Khaimah then was their important town. A British force sailed from Bombay and attacked the town on 13th Nov 1809. The town’s defences were subjected to heavy bombardment but the Qawasims put up a stiff resistance. The town was overpowered and burnt. Thus in a few hours, reducing these enterprising powerful people to poverty and weakness.

This was the first serious opposition the British encountered at the start of their long campaign to bring the territories of the Persian Gulf under imperial control. Ras Al Khaimah was again attacked and destroyed. The resistance of the Qawasims was termed as piracy. With destruction of the Port city, no obstacle remained to the British military control of the Gulf which became ‘an integral port’ of Britain’s informal Empire for 150 years. 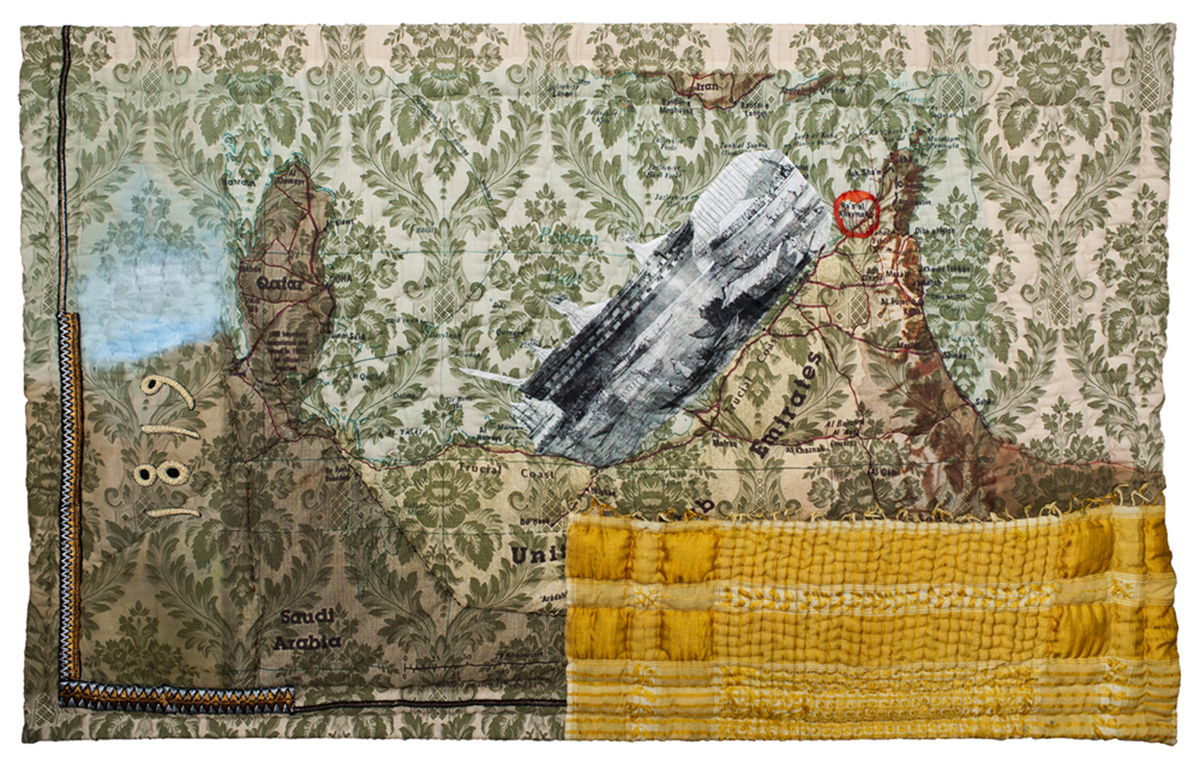 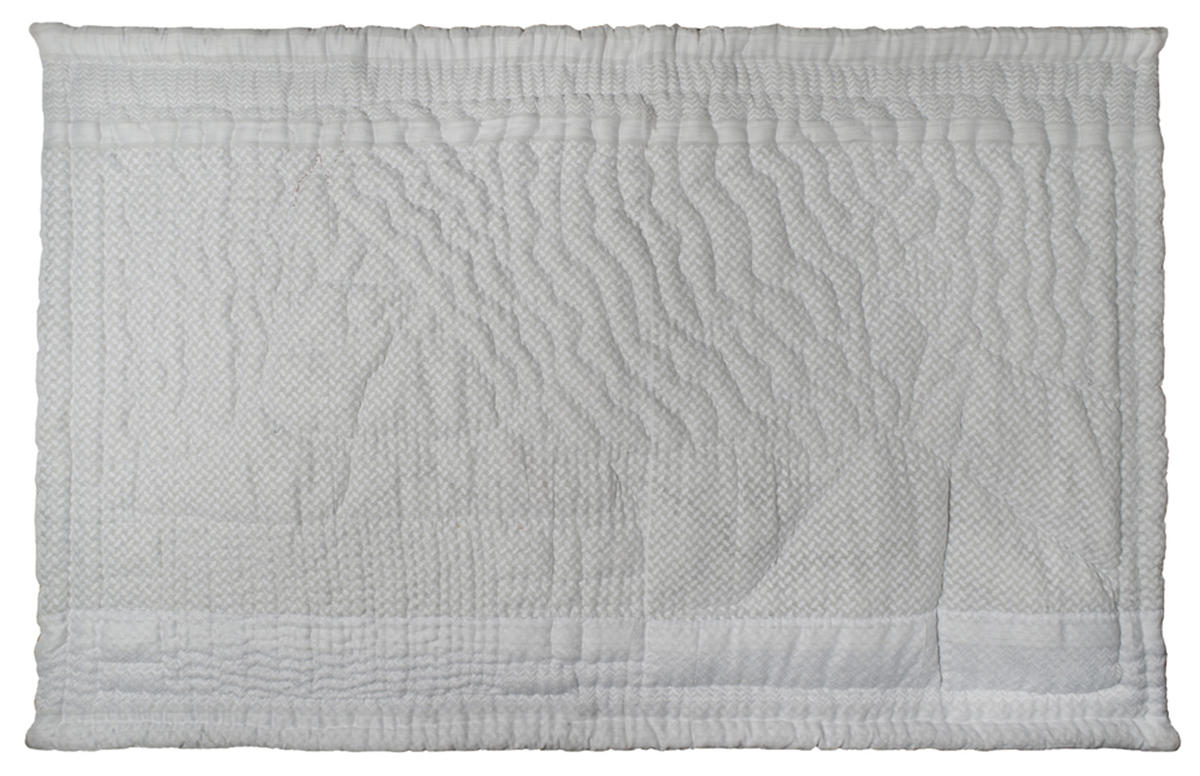 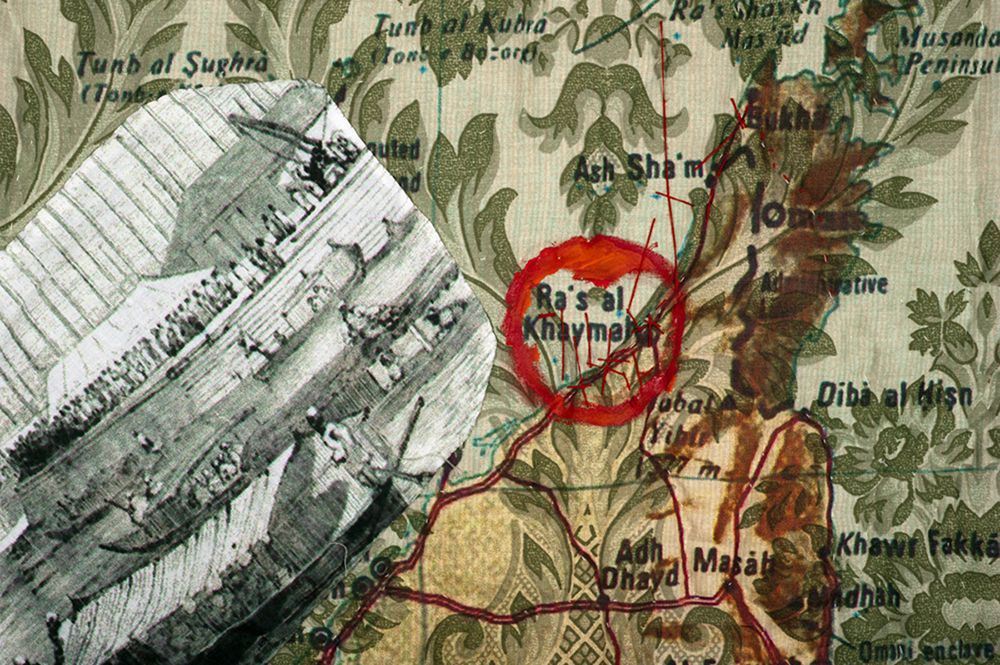 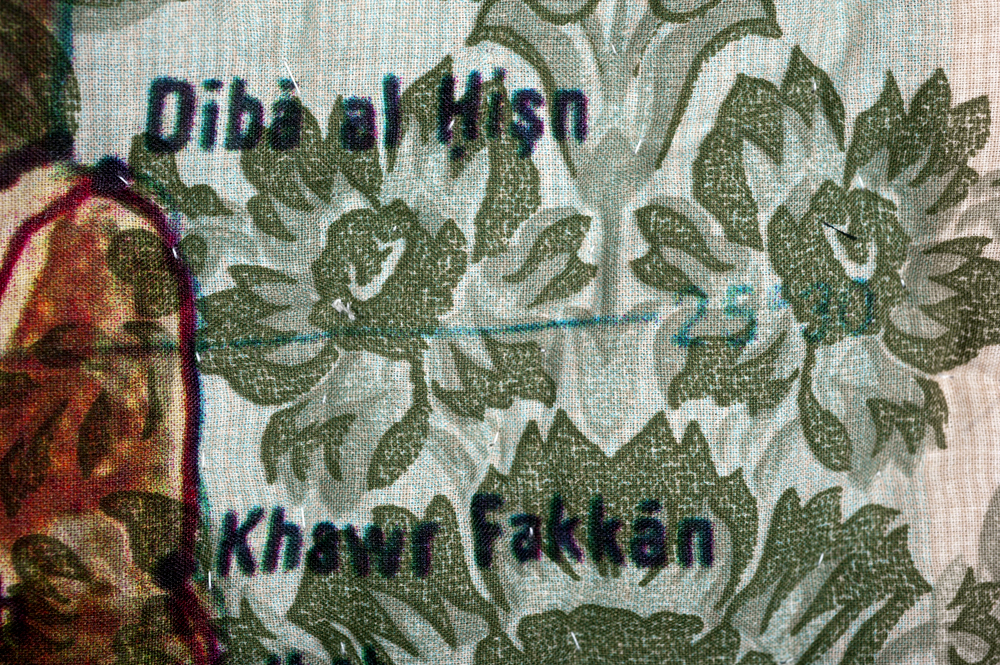 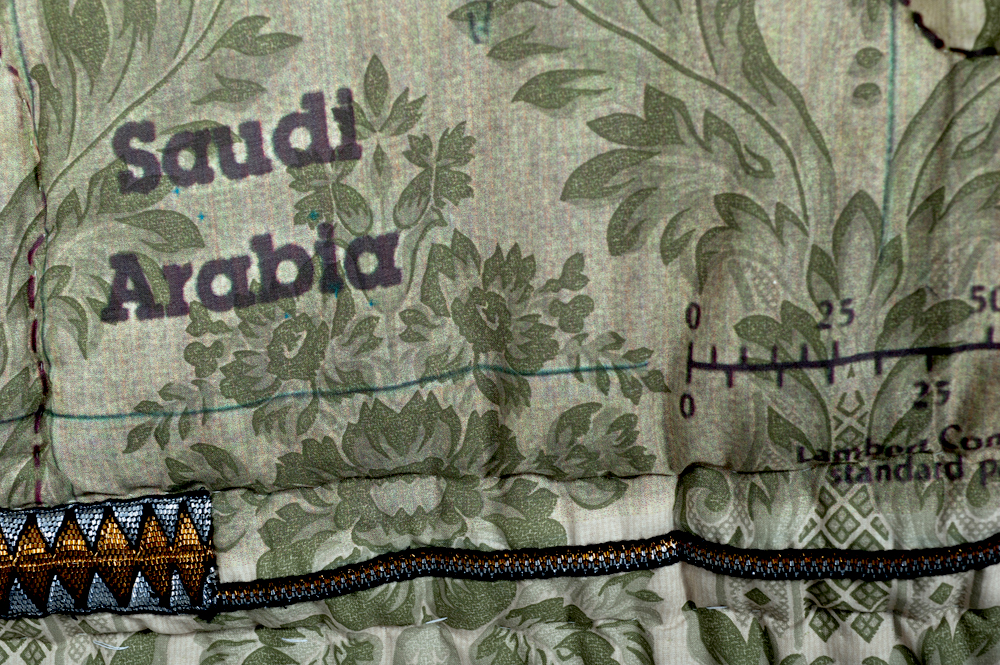 98cm X 123cm | Digitally printed woollen fabric with cotton appliqued ‘Made in India’ embroidered cotton from UK for the back. Quilt filled with American cotton wool.

Finally for the 7th Quilt, an image of the Preston railway station on the front with embroidered cotton chintz pattern on the back side that was obtained from Preston but had the tag ‘Made in India’. The 19th century saw a transformation in Preston from a small market town to a much larger industrial one, as the innovations of the later half of the previous century brought cotton mills to many northern English towns. Cotton prints such as chintz were replicated industrially and exported back to India (and the ports on the way) with enormous profits. With industrialisation came examples of both oppression and enlightenment. 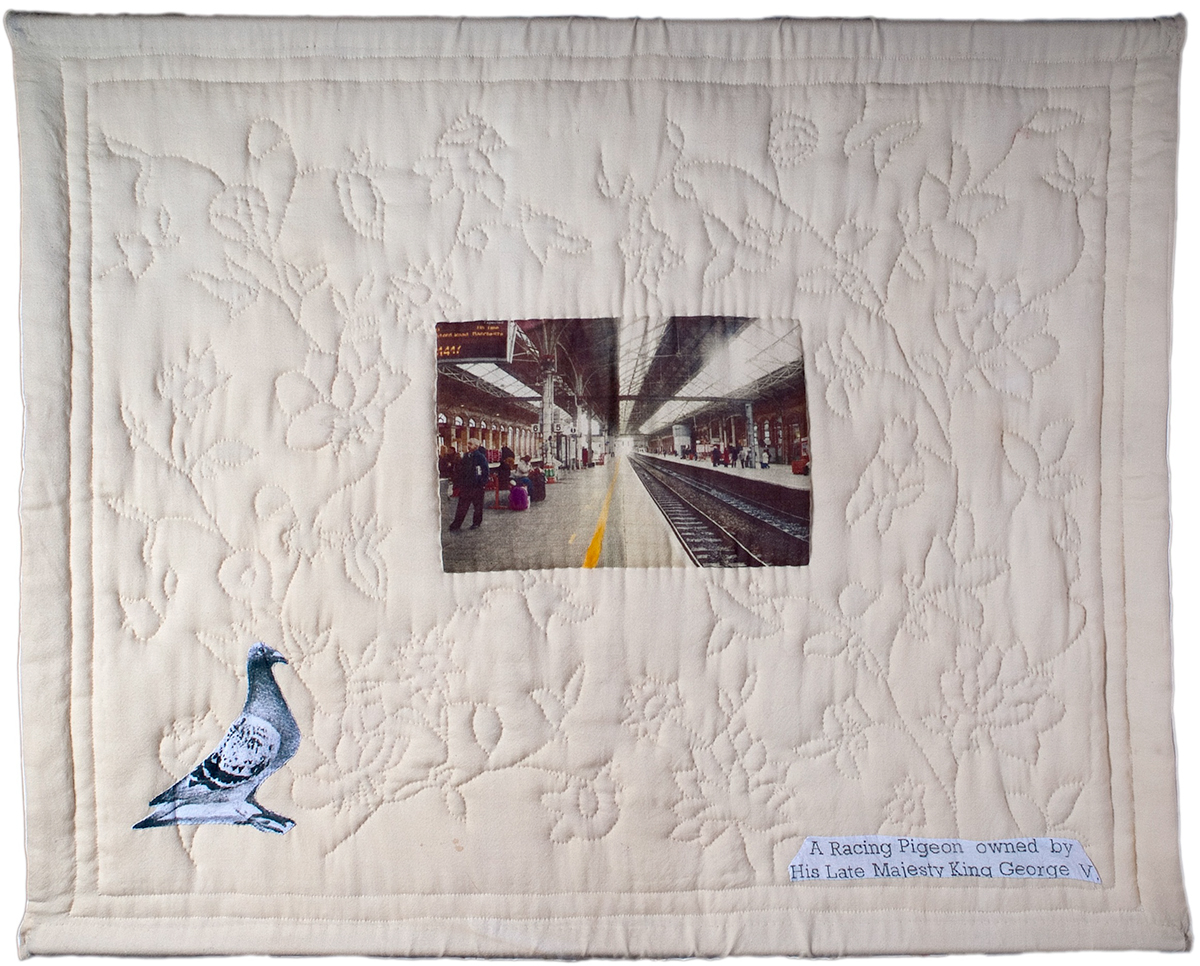